84% of all smartphone owners and 92% of feature phone owners in India have prepaid connections, according to global information and measurement company Nielsen. A majority of Indian smartphone users also prefer data plans that have a fixed monthly charge for limited amount of data usage. 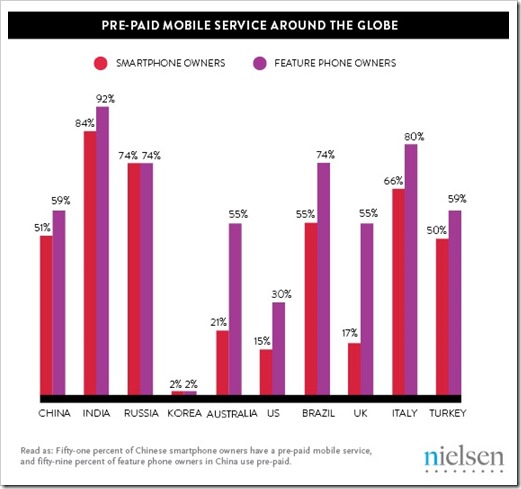 One of the factors driving the preference for contracted over prepaid service in developed countries is a customer’s ability to buy a handset directly from the mobile service provider. The contract generally involves either a monthly installment or a lump sum discounted down payment over and above the monthly plan charges. These contracts are also known to have a fixed monthly spend which customers will incur whether they use the allotted minutes and data or not. An installment for the handset through the length of a contract may be additional.

For example, customers in US can buy an unlocked and contract-free 16GB Black & Slate model of iPhone 5 from Apple’s website for $649. The same model bought with a two-year wireless service contract from AT&T can be purchased for $199. The phone would essentially be locked to the service provider until the end of the contract. Nielsen’s study notes that despite the preference of contracted service in developed western countries especially the US, most markets in the world still prefer prepaid mobile service. That is evident as mobile phone users in India and China, countries which have the world’s first and second highest number of mobile subscriptions, prefer prepaid. According to the latest Ericsson Mobility report, China and India account for nearly 29% of the world’s mobile subscriptions.

In an earlier generic usage-based comparison of prepaid and postpaid services in India, there appeared to be logic in having a prepaid connection when usage levels are low. Indian mobile operators have begun to woo consumers with top of the line smartphones like Apple’s iPhone by giving contract based connections. However commentators are not expecting a market-wide paradigm shift in the near future. Market research has indicated that sub Rs. 10,000 low cost android devices continue to account for a majority of smartphone sales in India.